Update: Due to my overwhelming desire to possess chickens, I failed to check with our landlord and underestimated our nasty neighbors. Sadly,  just as the chickens were moved outside to their cute little coop, they had to go and live with another sweet little family that didn’t have any chicken haters around them. The good news: through the power of social media, we are kept up-to-date on our little flock through Facebook and have watched their great adventures as they laid their first eggs, went to pre-school for show and tell and other sundry chicken adventures. One day, chickens again. 😦

I really can’t remember when or why I started loving chickens. I have collected a few trinkety chicken things. Different little chicken creations perch above my kitchen cabinets, I h 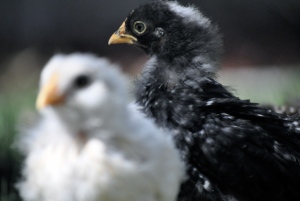 ave a couple of rooster pictures that my mom had in her house (I conned her into giving them to me), but other than that, it’s not like I have my house decorated in country blues and black and white checks with cows and chickens everywhere. Blech! I can’t even say that I’d ever been up close to a real chicken or even known people who have chickens! Seriously, where in the world did I come up with this fascination with chickens? I do have a story about how I had acquired a pair of chickens (albeit a pair of glazed papier mache chickens). Kendall was just three years old and she had the sweetest thoughts and the cutest way of saying things. We have known she was an animal lover since she could point with her little chubby finger and so when I brought this pair of chickens home, she suggested we name them. She named them Gobbledina and Chicken John (they were hens but, eh, details). Up they went with the chach-key above my cupboards and that was that. Well, Kendall would always refer to them and wonder if they were hungry or if they were married and things like that and we all grew rather fond of Gobbledina and Chicken John. When we packed to move, they were packed carefully but, when I was unpacking them somehow one got away from me and went skidding across the kitchen island onto the floor and…Gobbledina was no more. *moment of silence* I’m sure it was the stress of moving and the fatigue of unpacking because I’m usually a fairly reasonable person and not a huge REAL animal lover, let alone a fake animal lover. But I cried. Kendall by this time was five years old and she shared in my grief. Chicken John would have to go it alone.

Wow! That was pathetic!

Back to my real chickens. Like I said, Kendall (now 10 years old) is our animal lover and more specifically, horses. She loves everything surrounding horse culture. She looks for every opportunity to wear her hat and boots and most of her pictures are of horses or her future ranch. She always draws a picture of a guest house which she explains is for me to live with her in my own house on her property. And I kind of hope it works out that way! I grew up in Bakersfield and some of my favorite memories are playing at the Smith’s house with Bridget and her horse Jasper and the adventures we would have out at her house off Round Mountain Road. We were probably only ten years old. We would pack food and make up stories about where we were going and ride off for the day with such a spirit of adventure and independence. Now that we live in Colorado, there are plenty of opportunities to pay to ride horses, but Kendall’s going to probably have to wait for her ranch before she has her own adventures.

My long lost point here is about chickens and Kendall’s propensity for ag-related things, all of these reasons adding up to our recent influx of real, live, backyard chickens. We just decided to go for it! I have compost bin, we have a garden going, chickens and fresh eggs would be such a coup (get it?  coup…not coop, a chicken coup…no? I thought that one so funny when I posted it on Facebook, but no one got it, meh!) I’m not a died-in-the-wool tree-hugger (not that there’s anything wrong with that), but I would like to go down as one who was a responsible steward of resources and did better because I knew better. We did some research, visited a friend’s chicken set-up, decided it was doable and bought our six, leetle, day-old chicks! And, we have been smitten ever since! My husband was guarded. My oldest daughter was haughty (“Mom’s really in over her head with this one!”). Kendall and I were in a continuous knuckle-bump, my boy was unimpressed. But now…we all love them and their antics.

In five to seven months we’ll potentially have six, fresh, organic eggs a day! And did I mention that they will lay brown, blue, pink and green eggs?? It’s a beautiful thing, man! We have pets that give us food! And what funny little pets they are! Each one has personality characteristics that are so obvious and I just never expected that from CHICKENS! When they were a couple of days old, they would cry when I left their room and run to greet me when I came back. Now that they’re three plus weeks old, we take them outside for play-time and they act like little chickens, scratching and looking for bugs, trying out their wings and chasing each other, fighting over bugs. But soon, they tire out and come and find me sitting in the grass and hide under my legs as if I was Mother Hen. Who couldn’t love a little bunch of baby chickens such as these?!

Riveting. I promise. Chickens for everyone, is my motto. They’re sweeping the nation. A chicken in every backyard!

Waste time with me!

My Serious Side, Kind of

My Serious Side, Kind of

Always read something that will make you look good if you die in the middle of it. ~P.J. O’Rourke